Born in Ottawa, Canada’s glorious capital city, rob mclennan currently lives in Ottawa. The author of more than twenty trade books of poetry, fiction and non-fiction, his most recent titles are the poetry collections Songs for little sleep, (Obvious Epiphanies, 2012), grief notes: (BlazeVOX [books], 2012), A (short) history of l. (BuschekBooks, 2011), Glengarry (Talonbooks, 2011) and kate street (Moira, 2011), and a second novel, missing persons (2009). An editor and publisher, he runs above/ground press, Chaudiere Books (with Jennifer Mulligan), The Garneau Review (ottawater.com/garneaureview), seventeen seconds: a journal of poetry and poetics (ottawater.com/seventeenseconds) and the Ottawa poetry pdf annual ottawater (ottawater.com). He spent the 2007-8 academic year in Edmonton as writer-in-residence at the University of Alberta, and regularly posts reviews, essays, interviews and other notices at robmclennan.blogspot.com. rob is also the author of how it is I am not married / I want to sleep in the runcible spoon (2010).

To help us celebrate his birthday I asked Rob to do Seven of the Proust Questionnaire.

1.What is your idea of happiness?

Happiness is the freedom to do those things I think I would like to and/or need to do. Basically, how I’m living now, I suppose (although less financial stress sure would be nice). Spending time with friends, and my daughter, occasionally. Writing full-time with my lovely. We make books, and make books happen.

2.What is your favourite virtue?

3.What is your biggest weakness?

I sometimes feel battered around by the day-to-dayness of self-employed literary work more than I would like to. I require a thicker skin, perhaps.


4.Who are your favourite poets?


Hard to say, that. There are dozens of writers I attempt to follow regularly. Early on, writers such as Richard Brautigan, George Bowering, John Newlove, Margaret Atwood, Michael Ondaatje and bpNichol were very important to me.


Lists are difficult, because there is always ten times the volume of such I know I’m leaving out. Perhaps I could focus what is scattered across my desk currently? These days, I’m excited by recent work by Paige Ackerson-Kiely, Barry McKinnon, Pattie McCarthy, David McGimpsey, Rae Armantrout, Barbara Langhorst, Deborah Poe, Monty Reid, Sarah Mangold and Heather Christle.


Just today, I received Jenna Butler’s second poetry collection. I’d been looking forward to that for a while. And Marcus McCann has something new this spring, which is exciting.

Sure would be nice to see a new book out by Sylvia Legris. Or, a first trade collection by, say, Amanda Earl or Trisia Eddy.

5.Who are your favourite heroes and heroines in history?


Hah. Again, difficult to say. I do not like James II of England. I blame him for much, including the massacre at Glencoe and a battle in Ireland. Damn fool, him.

I’m fascinated by historical British Royals, for some reason. Queen Victoria intrigues. I’ve read many a book on Royals over the years. This is most likely something I picked up from my mother.

Simon Fraser was pretty interesting. David Thompson. The history of the exploration and mapping of the Canadian West is fascinating. Oh, and Sir Isaac Brock. He quickly took two American forts before their leaders knew the War of 1812 had even begun. Take that, invaders.

6. What do you most dislike?


Anyone too caught up in themselves.


Government hypocrisy, including the current federal leadership, who originally ran (very holier-than-thou) on a promise of honesty and transparency. Self-destructiveness re: environmental policies and reproductive issues. Every human being deserves a base level of respect, no matter who they are or what they believe. 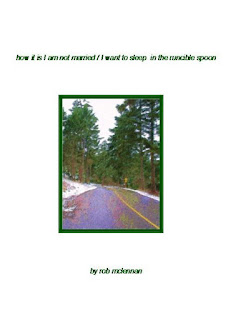 At the same time, I would think this should be something book reviewers should also be aware of. Every book and their author deserves the same, a base level of respect. No matter what the reviewer might think of such.

I also dislike when the mailman changes his schedule. Throws off my whole day.


Not sure I have one. But I do try to push myself pretty regularly to see what I didn’t know I could do. Life without a certain amount of risk, both as writer/creator and simply a person, doesn’t seem to have much point.

For a few years, I’ve been borrowing jwcurry’s “motto” (for lack of better terminology) about what his biggest goal as a writer/person/etc. is, and that is, to “remain interested.”

Email ThisBlogThis!Share to TwitterShare to FacebookShare to Pinterest
Labels: how it is I am not married / I want to sleep in the runcible spoon, rob mclennan