Heidi Greco does Seven of the Proust 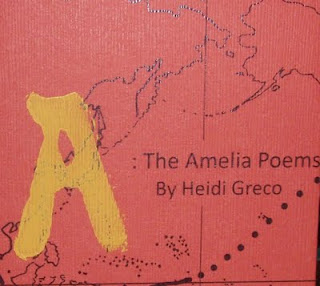 It's a story about a red-head named Reggie - a single mother who works as a cashier. It sounds ordinary but soon turns out to be a gripping tale of dreams and secrets that turn sour.

Heidi agreed to participate in Lipstick's "Seven of the Proust" questionnaire. It asks us to go deeper than the interview about how long you have been writing, to reveal a little of the writer's soul.

Lipstick wishes Heidi every success in her career as novelist, reviewer and poet.

Note: the acronym PQ in this blog means Proust Questionnaire and has nothing to do with the Parti Quebecois.

PQ: What is your idea of happiness?


Heidi: Sitting outside on a summery evening, sharing a meal with those I love. Or, if the weather isn’t cooperating, doing the same thing inside.

PQ: What is your favourite virtue?

Heidi: Charity, especially charitable acts that are done in secret.

PQ: What is your biggest weakness?

Heidi: In general, sweets. To narrow it down, chocolate.

PQ: Who are your favourite poets?

Heidi: Sharon Olds for her honesty. Mary Oliver for her never-preachy connections to the earth. Rhona McAdam for her ability to express the most complex notions with the simplest of words. I can only hope McAdam has a new book out soon, as I’ve worn quite a path in her last one, "Cartography. "

PQ: Who are your favourite heroes and heroines in history?

Heidi: Amelia Earhart, of course. Also Nikola Tesla whose almost magical Tesla coil is probably the closest thing yet to a perpetual-motion machine, or at least a very sustainable power-channelling device. And for each doing their bit to make the world a better place: Kurt Vonnegut, Elizabeth May and Robert Zimmerman.

PQ: What do you most dislike?

Heidi: I’m with Holden Caulfield on this one – phonies. They’re generally so overblown full of themselves.  On second thought, maybe I have to say pumpkin pie.

PQ: What is your motto?