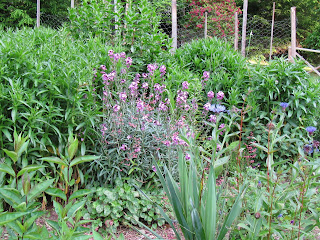 Two very distinct voices, Naomi Beth Wakan and David Bateman have created a beautiful new blog of response tanka. Not only is it finely crafted, it is free.  You can find it here . . . Pause

the honesty, my token
flower – profuse in seeding.
I too aim
for its transparency so that
you can see right through me
Naomi

seeing in the dark
all the lightness we have shared
ink woman, diva
we unite in othered woods
infirm against firm earth
David

Says David "When I approach haiku, and response tanka, I approach them through a phrase from a Wallace Steven’s poem - “uttered word by word.” These forms graciously offer me the opportunity to deposit my emotions into a very measured, and for me, liberating form. Writing response tanka can be an act of reclamation and self-preservation. The literal translation of kokoro, a healthy heart, contributes literally and figuratively to my personal sense of an idea of order in the midst of a chaotic world."

Naomi asks "What on earth could a rather domesticated, unsophisticated woman living on a small, very rural island have in common with a transvestite, city-smart man twenty-five years younger?  How could they have enough in common to cause them to write back and forth for several months sharing their momentary thoughts in the form of tanka?  Even here the gap between them is large, as he sticks, for the most part, to the 5,7,5,7,7, syllable count of traditional Japanese tanka form, while she adopts the short, long, short, long, long lengths of line that many non-Japanese tanka writers have adopted."

You'll find the answer to Naomi's question if you read some of them.